I’m not really sure how many viewers of this site will be aware that today is a “blackout” day to protest S.O.P.A (Stop Online Piracy Act) a bill that congress is trying to pass. But I did reflect on its relevance for religious websites, and concluded that at least a brief note was in order.

What SOPA will do

The idea that major Hollywood movies should not be pirated is innocent enough (I think), but the real effect of the bill will allow censorship privilege to major American brands or companies – so they can block or shut down content they deem a threat. Now, it doesn’t take a rocket scientist or a theologian to tell you that this could easily lead to the censorship of religious content. There is no movie or music content on this site, and quite honestly there isn’t much political either, but there is a truck load of Reformed Christianity and what many would consider “bible-thumping” material. 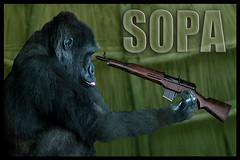 You may have noticed that Wikipedia is down today and that Google has blacked out their logo in an effort to stop this government censorship. Follow this link to sign the petition and tell congress NO! Below are a few links to help inform you more.