Yesterday I laid out the Bible reading plan that I use to get truly Christian edification out of my Bible study. Today I want to go through a case study of using my proposed plan.

I have been reading through 1 Samuel following the plan as previously discussed. For the most part, the beginning of the book was loaded with chapters that practically screamed with Christian encouragement. Types of Christ were easy to find, and the drama was not resistant to personal application. Recently however, that changed when we came upon chapter 13. So I thought it would make a good case study — precisely because it is not the most obvious, and lets face it, when Bible study guides pick out the easy well tread passages it feels a bit like cheating! 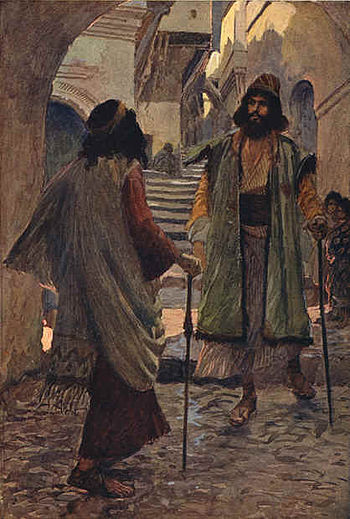 Reading aloud already gave me a sense this was not going to be an easy study. Saul begins his reign (presumably following Samuel’s admonition in the previous chapter) and things already look pretty bleak. Hmm? Oh well, on with the reading. Jonathan shows strength that his father takes credit for, but the Philistines decide to put a kibosh on any hopes by mustering a massive army (1 Samuel 13:5), the trembling Israelites are no match for them, especially since they have no weapons!(v.22) The center of the drama however, is not in the tension between Israel and Philistia, rather it exist in the center of the chapter between Saul and Samuel (and God by extension). Saul fails to obey and wait for Samuel to offer sacrifices and because of this loses his kingdom.
After asking the initial question, “what is this about” we should probably focus on Saul’s losing the kingdom. So a first shot at a complete idea could be: ‘Saul loses the kingdom through religious disobedience.’
Now, we are ready to dive back in, looking for any and all details.

Well that wrapped up stage 1 for me – though a few more details could have been brought out – this was a good start.

This was intimidating. Was there anything that jumped out in relation to the person and work of Christ? Not really. After a while, attention was given to the harshness of Samuel’s response to Saul’s first (noted) disobedience. I began to think about Moses’ sin which prohibited him from entering the promise land. Then it was suggested that Saul could have obeyed, and I could not help but thinking of the four-fold state of man. That got me thinking about Adam and Christ the 2nd Adam. Adam in the garden was the head of the Human race (prophet, priest and king?) and was given a covenant of life upon the condition of perfect obedience. So too, Saul was the head of God’s people – upon condition of obedience?? What about Christ? Isn’t Christ the truly obedient King? Christ is the head of God’s elect – but unlike Adam and Saul, he perfectly obeys in all things. What he gains he attributes to His people, unlike Saul who attributed to himself the gain of his people (v.3f). This connection to the covenant of works is perhaps further underlined in 2 Samuel 7 when God covenants with David in clearly gracious terms and in contrast to Saul (2 Samuel 7:15). It also bares remarking on the result of Adam’s disobedience being naked and subject to sin and death crouching at the door. Saul is left with nothing but 600 disarmed men against an innumerable enemy. In spite of the death-dark picture disobedience has brought on the landscape, “The Lord has sought out a man after his own heart, … to be prince over His people” – the second Adam, the true King.

Ok, there is some real meat here after all! But what does it mean for our life now? At least this:

I shortened some of the thought process I went through for the sake of readability, but I think you can get the idea of what my Bible reading plan looks like in action. At first, connections to Christ can be difficult, and if we try to make connections too quickly it can lead to all sorts of strange ideas. However, I noticed that when the Pactum Salutis starts staring me in the face – it almost seems too obvious. I would love to hear in the comments below if you think I missed anything, or if you think I was way off in my reading. Reading your Bible is not only a duty, its a means of grace, and it doesn’t have to be painful to find it profitable.