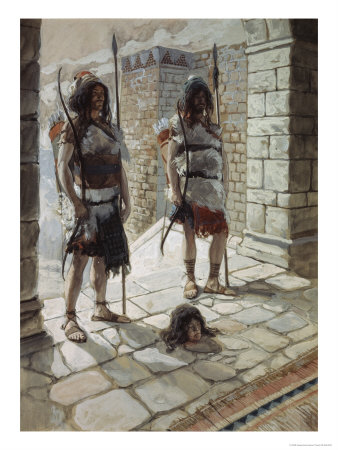 It really is amazing if we stop and think about the difficulty that followed King Sual’s being rejected by God. David is anointed by Samuel seemingly shortly after, but years pass before Saul himself is killed in battle. In the years that pass, David becomes closest of friends with Saul’s own son and heir apparent. David is on a flight for his life away from Saul, when Saul and Jonathan lose their lives as a fulfillment of God’s rejecting Saul and his household as king 1 Sam 28:16-18. So much death had to happen in order to fulfill the promise to David!

In fact, even after David is crowned King over Judah at Hebron – years will pass again while David and Ish-bosheth fight with each other. Ish-bosheth is another descendant of Saul who must die for David to have the throne. Abner is Ish-bosheth’s right hand guy, and because of a quarrel over a woman, Abner leaves Ish-bosheth’s service and joins up with David. However, blood shed continues. Joab kills Abner. The depressed Ish-bosheth, who may have contemplated taking his own life after loosing Abner – is murdered by a couple of ruthless brothers. Thinking they will please David and win favor – they bring Ish-bosheth’s head to David. 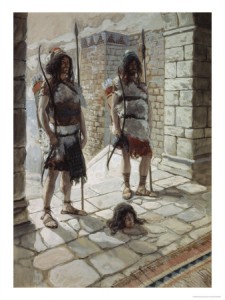 As I reflect on David’s bloody rise to Kingship, I can’t help but think about the way Grace is at work. Through all this killing God is establishing His King in Zion! But David is not the promised King. Not even Solomon – whose life is decidedly less filled with blood shed. No the great King anticipated is the Lord Jesus Christ. But in His case, history and blood shed is reversed! He ascends to the thrown not by the death of the competing evil kings – but through His own death!
Why is that so significant?
Well, because we see that common grace only turns already bad situations around for a generally better use. But ultimately – we need special, divine Grace. Grace that saves us from the sinful world we live in, and from our sinful selves. The cool thing about Christ’s history is that it is a history of redemption through suffering. Christ doesn’t take over by adding suffering to others, but by taking on all others suffering. He is the ultimate king because he makes an end of blood shed – through His shed blood.