Here is the story behind our name “Omega OPC of Williamsport” 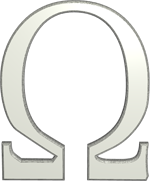 Who ever heard of Omega as a church name? Why not use “Calvary”, “Trinity”, “Redeemer” etc?

Though the name sounds perhaps like an attempt to be different, or a half baked novelty, it actually does represent to us the same declaration of the Gospel of Jesus Christ, and the identity we hold dear as those other well tread titles.

The omega is the last letter in the Greek alphabet. Jesus refers to himself as both the “alpha” (the first letter in the Greek alphabet), and the “omega” three times in the book of Revelation. By doing so He is saying that He is the sum of all things. All life has its context in relationship to Christ. But He is also implying that He is that from which all things spring and to which all things resolve. He is the prototype but He is also the goal.

It is that last sense that makes the name “Omega” so significant. Whenever you begin any task the most important (and often first) thing you need is the goal. It is the goal that gives the rest of the energy or events involved in the tasks significance.

James 5:7 expresses this beautifully in the picture of the farmer – and encourages Christians to live out of the sure future that we have the precious fruit of salvation which is Christ himself. That is why, a name like “Omega” carries with it the gospel. Jesus is our goal, our end, our life. Omega conveys more than simply what Jesus does, but it also underlines what He is!